Science Fiction and Fashion & Design’s Space Age. The rise of cyber-camp aesthetic (1968-1971): documenting Imaginary and Couture in the Late 1960s

In this long essay, I deal with fashion and design as medium forms, as well as, movie and television. I analyze this relation in the Late 60’s in the so called Space Age.

I describe and document the way both mediums share a negotiation of form and colour, presentation, interpretations and how they inform one another, and present both as a social storytelling in which cultural values are displayed and negotiated. In fact, even if the Sci-Fi genre was born in the early twentieth century, the phenomenon explodes in the States during the Fifties as pop culture, but its period of impact on design and fashion can be individuate in few years from 1967 to 1971, the years around The Moon Landing (July 20, 1969). Science Fiction’s imagery portrays a new vision of the world that goes beyond the boundaries of genre and touches literature, film, fashion and even design. I document the relation Fashion & Sci-fiction in the Paco Rabanne, Gernreich Pierre Cardin, Andrè Courrèges, Pierre Cardin, Emanuel Ungaro, Jacques Fonteray and Emilio Pucci’s Collection (from 1967/1968 to 1970/1971 seasons). These so-called couture Space Age that at that time dominated in Paris, but were slow to cross the Atlantic, adding futuristic elements of the film to the fashion, and viceversa. I will use the main movie of that period: Kubrick’s 2001:A Space Odyssey (1968), Orangeclock (1971), and Barbarella (1968) and the tv-broadcasting of Star Trek: The Original Series (1968-1971) as an investigation into the dialogue between science fiction’s cinema, fashion and design in order to document what I call cybercamp. Science Fiction’s imaginary, was able to create a new mass aesthetic based on the Benjamin «concept of sex-appeal of inorganic», that we can call the cyber-camp aesthetic. 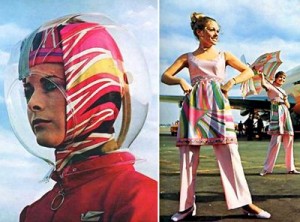